Note: People who bought my book dealing with Android development will probably notice this article looks like a section of the fourth chapter “UI & UX: major components for a great user experience and the Android logic”. Let’s be honest, this blog post is pretty much an enhanced translation of a section of my book. For those who don’t know about this book, written in French, the title is “Développez pour Android”. Released about a year ago, it deals with Android development in general and particularly focuses on making highly optimized Android applications. If you are interested in this book, you can buy/download it here.

Once again, from my point of view, the splash screen paradigm is a port of the iOS equivalent. Some of you may start thinking I hate iOS because it influences Android in a really bad way. I often consider lots of mistakes in Android applications are due to stupid ports of iOS apps to Android. However I don’t consider iOS as a crappy mobile platform. I honestly believe iOS is an awesome mobile OS. Issues are not related to OSes themselves but to how people incorrectly understand them and use them. The splash screen is one of the best example of how people are misleading OSes in general. Being widely used on iOS, the UI pattern is also actively discouraged by Apple! Indeed, if you look closely to the iOS documentation you will notice Apple encourages developers to use launch images. Launch images are very different from splash screens as they are images used to pretend an application launched rapidly. On iOS, the system displays the launch image instantly when the user starts your application and until the app is fully ready to use. As soon as your app is ready for use, it displays its first screen, replacing the launch placeholder image. As a result, supplying a launch image is the best way to improve user experience. The graphic below shows you the launch image on the right that is used in the built-in “Stock” iOS apps: 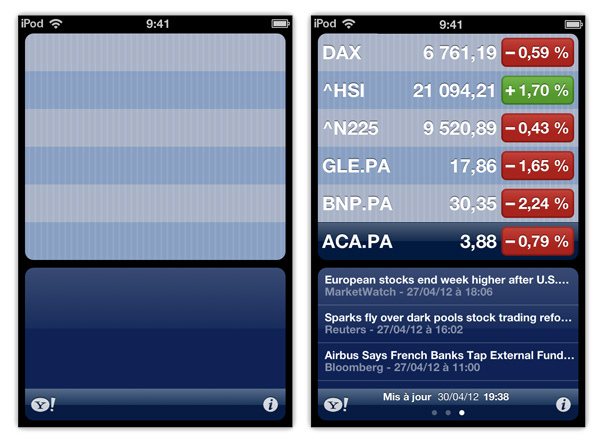 The iOS documentation clearly specifies launch images should not be used as an opportunity to display branding information. Unfortunately, rules are made to be by-passed and iOS folks understood that. I honestly can’t blame them! They have simply used a functionality offered by the framework and slightly modified launch images to use them as splash screens. What is very disappointing to my mind is the same pattern is currently happening on Android. I am strongly convinced splash screens are not appropriate on Android for several reasons I would like to share with you:

When Apple launched the first iOS SDK, it may have made a great decision by enabling developers to fake a fast application startup via a launch image. Unfortunately, iOS evolution - iOS now runs on several densities and devices and supports multitaking - and the fact that developers completely hacked the way launch images are used made it a big mistake. Spending time on ensuring applications are opened rapidly would have been a better option. On the other hand, Android has been built to deal with an insanely large amount of devices. Please start taking this into account and continue fighting against the iOS enthousiasts who think the iOS way is the only way. iOS and Android are both awesome mobile OSes. They both have some particularities that need to be taken into account when developing applications. Understanding an iOS app is appropriate on iOS, and an Android app is appropriate on Android, etc. is the path to making awesome multiplatform applications.